I remember my paternal grandfather’s telling me about his experience when Halley’s Comet made, in 1910, its return trip to slingshot around the sun.  Grandpa told me that the night sky was filled with the sight of the comet.  He described the tail of the comet as having stretched almost all the way across the heavens and the illumination being so incredibly bright that he could, even at midnight, read his newspaper solely by the comet’s light.

Halley’s Comet is named after Edmond Halley, who was the first astronomer to calculate that the comets of 1531, 1607, and 1682 were one and the same.  He predicted said comet would return in 1758.  Halley, who died in 1742, did not live long enough to determine if his calculations were correct, but they were.  Reappearing from the void of space every seventy-six years, the comet now bears Halley’s name.  Thanks to Halley’s discovery, comets that follow periodic timelines have since been classified as periodic comets.  The returns of these comets are long-awaited events.

Waving Of The Green

This past Sunday was Palm Sunday; a day in which Christians remember and observe the fulfillment of a long-expected event, Jesus’ triumphant entry into Jerusalem.

If you have ever attended a Palm Sunday worship service, you may very well have been given a palm frond to wave as you entered the service and lay at the foot of the altar.  The distribution of palm fronds was a longstanding Palm Sunday tradition at one of the two churches I served as pastor.

What The Event Meant

You may think it odd that I have chosen, toward the end of Holy Week, to revisit Palm Sunday; but I would like for us to take a closer look at the magnitude of the event.

All too often, the palm branches of Palm Sunday are overshadowed by the bloodstained cross of Good Friday and empty tomb of Easter (a. k. a Resurrection) Sunday.  The fact, however, remains that were you to remove Palm Sunday from the equation; there would have been no crucifixion on Good Friday and no resurrection on Easter Sunday.  The drama cannot play out if Jesus does not arrive on the scene.

As our Scripture opens; we find Jesus and His disciples having neared Bethphage and Bethany, which are both positioned on the lower side of the Mount of Olives.

28 And when he had thus spoken, he went before, ascending up to Jerusalem.

29 And it came to pass, when he was come nigh to Bethphage and Bethany, at the mount called the mount of Olives, he sent two of his disciples,

30 Saying, Go ye into the village over against you; in the which at your entering ye shall find a colt tied, whereon yet never man sat: loose him, and bring him hither.

31 And if any man ask you, Why do ye loose him? thus shall ye say unto him, Because the Lord hath need of him.

32 And they that were sent went their way, and found even as he had said unto them.

33 And as they were loosing the colt, the owners thereof said unto them, Why loose ye the colt?

34 And they said, The Lord hath need of him.

35 And they brought him to Jesus: and they cast their garments upon the colt, and they set Jesus thereon.

In Need of a Steed

Jesus sent two of His disciples on a mission to find a colt tied next to a house.  In obedience to Jesus, the disciples scouted ahead and found not the colt of a fine stallion, but donkey.  The latter was exactly what Jesus intended.  If the disciples were asked why they were loosing the donkey, Jesus prompted them to reply that their Lord had need of the animal.  Much to the disciples’ amazement, everything was exactly as Jesus had said.

An interesting observation is Jesus’ having mentioned that the donkey was one on which no man had ever sat.  In other words, the donkey had never been broken or trained to carry a rider.  Any seasoned equestrian will tell you the unlikelihood of anyone’s mounting and riding such a beast.  Further proving His Divinity, however, Jesus is about to do both.  The young colt is brought to Jesus, and a few coats are formed into a makeshift saddle.  Climbing atop the saddle, Jesus sets His sights and humble steed toward Jerusalem.

Now, let’s flashback five-hundred years to the prophet, Zechariah, and his words that parallel with what we just read.

9 Rejoice greatly, O daughter of Zion; shout, O daughter of Jerusalem: behold, thy King cometh unto thee: he is just, and having salvation; lowly, and riding upon an ass, and upon a colt the foal of an ass.

The nation of Israel had been, off and on, watching for this very scene to unfold.  Jesus’ approaching arrival was a long-expected event, yet those who were presumed to be the holiest and wisest among the people were absolutely clueless that prophecy was being fulfilled right before their very eyes.

36 And as he went, they spread their clothes in the way.

37 And when he was come nigh, even now at the descent of the mount of Olives, the whole multitude of the disciples began to rejoice and praise God with a loud voice for all the mighty works that they had seen;

38 Saying, Blessed be the King that cometh in the name of the Lord: peace in heaven, and glory in the highest.

39 And some of the Pharisees from among the multitude said unto him, Master, rebuke thy disciples.

40 And he answered and said unto them, I tell you that, if these should hold their peace, the stones would immediately cry out.

Did you notice that Luke does not focus on the palm fronds the crowd was waving?  Instead, his attention is on the garments the people were removing and laying as a carpet for the donkey on which Jesus was riding to tread.  The surrendering and placement of these garments were signs of allegiance to Jesus, who the people were proclaiming to be their king.

The image we need to burn into our minds is Jesus as He rides, cresting the top of the Mount of Olives, on the back of this small donkey.  In our society; Jesus’ riding, His feet almost dragging the ground, in such a way would look almost comical.  In Jesus’ society, however, His riding the donkey was symbolic of a king who comes in peace.  Had Jesus been riding a huge horse, tail swishing and feet prancing; Jesus would have, instead, projected the image of a king who comes in power.

We have to remember that Jesus was considered to be an enemy of the Temple; so the logical thing for Him to have done would have been to slip, under the cover of darkness, into Jerusalem.  No, Jesus came midday and rode, whilst His disciples proclaimed Him as Lord and King, boldly into Jerusalem.

A group of Pharisees did not like the praises the disciples were shouting out to Jesus and called out to Him to rebuke His disciples, but Jesus boldly responded:

If they should hold their peace, the stones would cry out!

Jesus was paraphrasing the words of the prophet, Habakkuk.

11 For the stone shall cry out of the wall, and the beam out of the timber shall answer it.

Weary of the injustice in the nation, Jesus referenced Israel as a house in which every stone, timber, and piece of mortar reverberated with cries for justice.

41 And when he was come near, he beheld the city, and wept over it,

42 Saying, If thou hadst known, even thou, at least in this thy day, the things which belong unto thy peace! but now they are hid from thine eyes.

No one but Jesus truly knew and understood the significance of the chain of events that He set into motion when He rode that borrowed donkey down the Mount of Olives and through the gates of Jerusalem.  Jesus was aware of the persecution and death that awaited Him, yet He still came to fulfill His destiny. 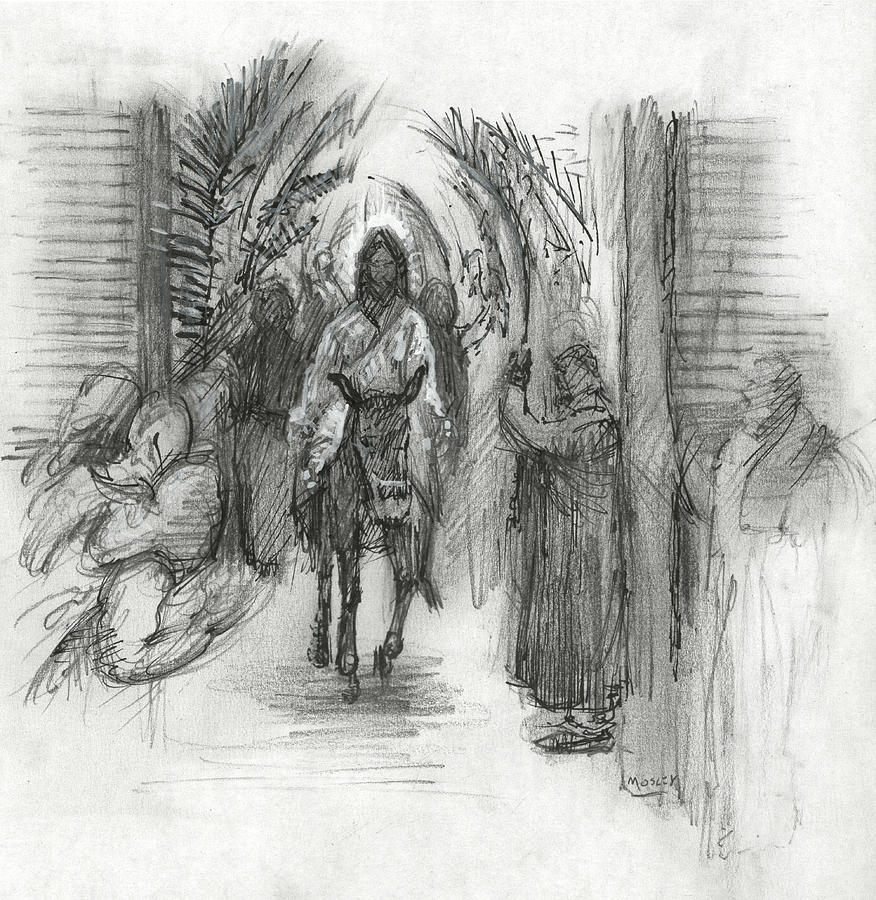 The angel, Gabriel, revealed to the prophet, Daniel, a rather specific timeline as to when Jesus would make His royal entrance into Jerusalem.  Although prophetically based, this timeline was in alignment with the Hebrew calendar’s twelve thirty-day months.

25 Know therefore and understand, that from the going forth of the commandment to restore and to build Jerusalem unto the Messiah the Prince shall be seven weeks, and threescore and two weeks: the street shall be built again, and the wall, even in troublous times.

Bible scholars have determined the historic timeline to be four hundred and eighty-three years from the day King Cyrus the Great issued Nehemiah the decree to repair the walls in Jerusalem until the day Jesus came riding into the city.

Applying those four hundred and eighty-three years to Gabriel’s prophesy, the scholars deduced that Gabriel was speaking in a prophetic language in which His usage of the word, weeks, actually translates to years.  Further added to the mix is the fact that the word, threescore, translates to sixty years.  Putting together all the prophetic pieces, the scholars compiled Gabriel’s prediction into the following numbers:

During His ministry, Jesus said that He has gone to prepare a place for all believers.  Let me remind you of another long-expected event, the second coming of Jesus, that is yet to be.

3 And if I go and prepare a place for you, I will come again, and receive you unto myself; that where I am, there ye may be also.

In a parable regarding His impending return, Jesus chose a fig tree to symbolize Israel.

32 Now learn a parable of the fig tree; When his branch is yet tender, and putteth forth leaves, ye know that summer is nigh:

33 So likewise ye, when ye shall see all these things, know that it is near, even at the doors

34 Verily I say unto you, This generation shall not pass, till all these things be fulfilled.

35 Heaven and earth shall pass away, but my words shall not pass away.

In 1948, Israel blossomed on becoming, once again, a Jewish nation.  A biblical generation lasts seventy years.  Beginning in 1948 and counting seventy years forward made 2018 the end of that specific generation.

As we witness, more and more, the unfolding of prophecy and imminent signs of Jesus’ return; one question looms large:

Will we be ready to go?

Donna relays the story of one particular Sunday evening when her mother, father, and she were preparing to go to church for the Sunday evening service at which Donna was pianist.  When her parents were dressed and headed for the door; Donna, a fashion-conscious teenager at the time, was not quite ready.  Perpetually punctual; Donna’s father gently chided her when he, car keys in hand, said:

You knew a year ago that you would be going to church tonight, so there is absolutely no excuse for your not being ready to go.

Donna had no defense against her father’s logic.  She knew he was right.

Lord Jesus; grant that we, at the appointed time on the appointed day of Your return, not be found wanting, but ready to go.  Amen.

To accept Jesus Christ as your Lord and Savior, all you need do is open your heart to Him, earnestly repent of your sins, and pray the sinner’s prayer.

Your visit to PRN Pastor is very much appreciated.  We hope you will return often and grow with us in the Word Of God.